Posted on September 8, 2011 by thirteenvegetables

We have not been idle since I last posted about our oven project 3 weeks ago. We completed the thermal mass dome, finished the chimney chamber, and got most of the insulation layer up too. We finally ran out of clay and had to put work on hiatus; but we expect to finish up the insulation and to put on the first layer of finish plaster this coming weekend. It’s been very exciting to see the final shape of the oven emerge – I can almost smell the pizza.

Thermal mass dome and chimney chamber completed. After the initial problems with slumping cob we built up the thickness incrementally. That seems to work well, though it does take longer. We haven’t seen any significant cracking so far. 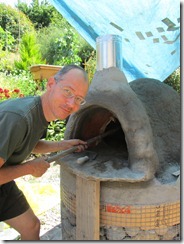 A big moment: extracting the supporting sand after removing the inner door. 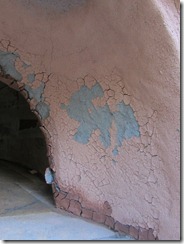 The clay slip layer did not bond with the cob. It was probably too thick. Next time I would not try to do slip and cob in one step, but rather apply the slip in thin layers afterwards.

We’re going to have to do some repair and resurfacing; fortunately, this is mainly an aesthetic issue. 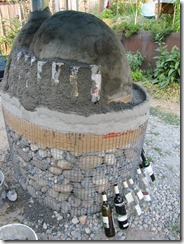 We used more bottles in the insulation layer. It cuts down on the amount of perlite needed; and probably also adds a bit more strength to the otherwise very crumbly perlite-clay mixture. Overall, we used about 60 bottles in the construction of the oven. No, we haven’t been on a binge – most of these came from the recycling bin of our local wine merchant.

A thin application of cob completes the insulation layer. This will eventually be covered by finish plaster, to create a nice and smooth surface.

This entry was posted in Alternative Building, Food and Cooking, House. Bookmark the permalink.