Posted on March 30, 2013 by thirteenvegetables

Spring and warmer temperatures have finally come around again – time to release the mason bees to perform their pollination magic. In preparation for that, we organized a mason bee house building party for some neighbors that were interested in putting out a bee house of their own. We had plenty of extra cocoons from 2012 – enough to get everybody started with their own little batch of cocoons. 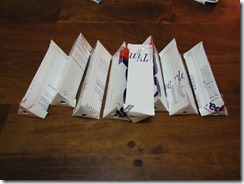 These are the hatching containers. Each contains a mix of male and female cocoons. The containers will be placed close to the bee house so bees can easily find their way to the nesting tubes. 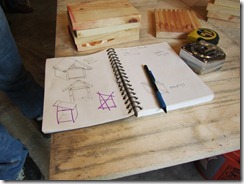 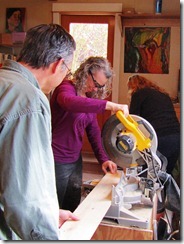 We started out with 7” lengths of pine board blanks. Then we used a 5/16” router to cut channels for the nesting tubes.

Our neighbor Rachel generously provided the workspace and power tools for the event. 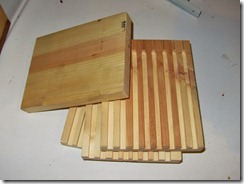 A completed stack of nesting trays. 24 tubes is plenty for a city backyard. You can stack as many of these trays as you like, depending on how many fruit trees you need to pollinate.

It’s a good idea to provide some weather protection for the nesting trays. The enclosure also makes it easier to mount the whole thing on the side of a house or in a tree. 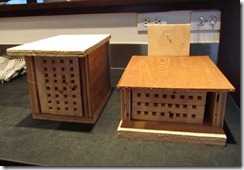 Finished houses ready to be deployed.

It’s not too late to still put out some bees of your own. Check out my previous post on how to be successful with mason bees.

This entry was posted in Bees, Fruit Trees. Bookmark the permalink.